Meet Your Local Abortion Funder is an interview series conducted by NYAAF volunteer Chanel Dubofsky in which she interviews current NYAAF board members about why they are involved in abortion fund work. 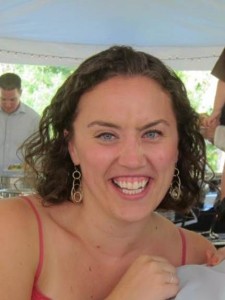 Maureen has been on the NYAAF board for four years. She started as a volunteer and shortly thereafter joined the board as the volunteer coordinator. She also serves as the Board Co-Chair.

Why do you do this work?

I came to this work because, as a young activist, I was looking for a place to get involved, do direct service and find my voice. But now it is more than that. I’ve learned so much about the barriers to abortion access and seen them first-hand and it feels like something I need to do, as someone who believes in reproductive justice, to try and help bring down those barriers. And it’s so concrete! There is such a measurable impact of this work. We provide funding and someone who doesn’t want to be pregnant doesn’t have to be pregnant anymore. Or we give information about enrolling in Medicaid and someone who qualifies is able to have that coverage going forward. I also believe it’s about empowerment. We want people to know that they can advocate for themselves at a clinic, at a Medicaid office, and on the phone with us. We want to empower people to do what they think is best for themselves and for their families.

What does reproductive justice mean to you?

That is a big question! I love the definition from SisterSong, “the right to have children, not have children, and to parent the children we have in safe and healthy environments.” To me, it’s about being able to create the life, family and future that you would like to have. It’s easy to understand the idea of individual reproductive rights but reproductive justice take that and adds consideration of the intersections of race, class, environment, immigration status, gender identity, etc.

I feel really inspired by reproductive justice. It means I have to get out of my comfort zone, learn about things I may have never experienced personally, try to let go of my privilege, try to be a better ally. It feels so promising. Really big things could happen if we could all address the problematic, unjust systems and power structures with the reproductive justice framework in mind. Many forms of injustice are systematic and interconnected so if you want to dismantle those systems you will not be effective if you come at it from one angle.

What are your hopes for the future of abortion access?

My hope for the future of abortion access is that all abortion fund volunteers can go home and take a nap soon! I’m joking but what I really mean is that I would love to see a world where abortion funds are not needed. Repeal the Hyde Amendment, expand insurance coverage for abortion, expand Medicaid coverage. Make sure everyone makes a living wage and can afford to support themselves and their families. Everyone having the financial means and support to create the family they want to create would be my dream.