Fundraising for the Bowl-a-thon is simpler than you think…

Fundraising may seem complicated, but simply asking is really the best way to reach your goal.

Sending individual personal messages to friends, family, colleagues, etc. has been found to be the most effective way to encourage giving. Asking them three times is even more successful.

Adding sincere personal touches goes a long way and it helps show your potential supporters that you are truly committed and passionate about this cause.

To help you out, we’ve included a couple example emails that you can feel free to customize and use!

Good luck and look out for more handy fundraising emails coming to you weekly!

Hello Friend,
I know it may be hard to do, but can you imagine what it would be like if you were unemployed, had only $100 to your name, and a $600 bill for your upcoming abortion. Think of how it hard it can be to feel like you have to choose between food and making your appointment. Sadly, many people in New York are facing choices like these despite their legal right to abortion care.
This year, I have committed to raising $[x] for NYAAF, an organization that works to provide funding for every person who needs financial assistance to abortion care in New York through their annual Bowl-a-thon. In 2013, they pledged nearly $100,000 and this year is slated to be even bigger. Without a successful Bowl-a-thon, NYAAF cannot do this work.
Help me strike down barriers to abortion access and guarantee that one’s right to health care isn’t determined by how much money they have. Donations of $15, $10 or even $5 really make a difference! [link to your personal page]
Thank you,
[Your name here]

The below letter is courtesy of Jill Greenberg, who sent it to 22 family members!

As you may or may not know, I [volunteer for/support/am friends with X board member of] the New York Abortion Access Fund (NYAAF). It’s an all volunteer run organization that runs completely on donations from individuals (they don’t receive any grants and the donations go straight to those in need.) I am participating in their annual Bowlathon, where they raise the majority of their funds for the year! Last year, NYAAF pledged $96,716 to help 364 people access the abortion services they desperately needed. Please support me in NYAAF’s biggest year ever by donating to my Bowlathon page here: [link here]

“The decision to become a parent is one of the most important decisions people make in their life. As a mother and an obstetrician-gynecologist, I don’t believe pregnancy or parenthood should be forced on anyone.” -Lisa Bayer, MD, Physicians for Reproductive Health

Please support me by donating to my Bowlathon page here: [link here]

That means we need to pick up the pace to meet the demand for our biggest year yet! We’re so glad to have you on board to help us & we’re positive the Bowl-a-thon is gonna be amazing!

P.P.S. NYAAF is looking for three amazing people to join our Board of Directors. Find out more info here & let us know if you’re interested! 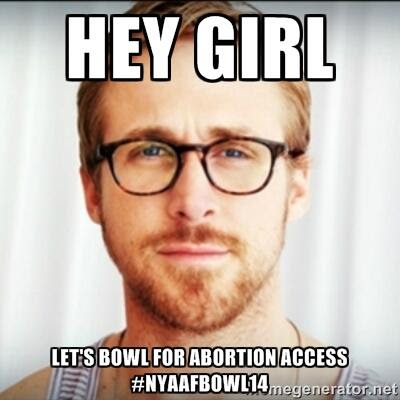 As the Bowl-a-thon season comes into full swing, we wanted to talk to you a little bit about personalizing your fundraiser page. The more engaging your page is, the more people will be enticed to support. And luckily, it’s VERY easy to customize your page!

Here are some starters to help inspire your page’s amazingness:

More than anything, make your page a reflection of yourself. People that may pledge to you are interested in knowing WHY this work is so important to you. Get creative in the ways you express this! Your page is your canvas!

As always, please reach out to us if you have any questions and happy funding!

Many thanks,
Dana
NYAAF Bowl-a-thon Coordinator

P.S. You can find our Bowl-a-thon FAQ here.

P.P.S. NYAAF is looking for three amazing people to join our Board of Directors. Find out more info here & let us know if you’re interested! 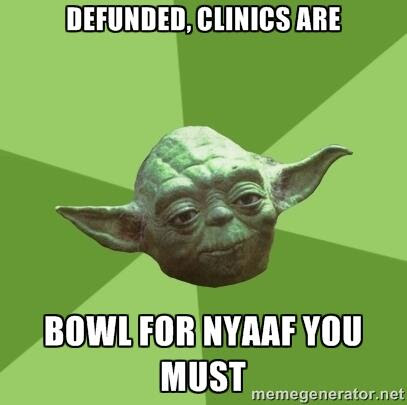 Come bowl with us!

Whether you want to bowl with us, support an existing team, or simply find out more about the Bowl-a-thon, check out: bit.ly/NYAAFbowl14

Most importantly, the Bowl-a-thon is what allows NYAAF to do the work we do. Without a successful Bowl-a-thon, we’d have to scale back our services & refuse help to those who need it most.

Will you help us achieve that goal?

To motivate you to join us, we’ve compiled a handy list of FAQ, which can be found below. We’ve shared this info with our already-registered bowlers, but we know it’s useful for everyone!

More after the jump…

END_OF_DOCUMENT_TOKEN_TO_BE_REPLACED

THANKS to everyone who came out to the Other Means reading at The Flying Saucer cafe in Brooklyn last night. We raised very respectable $331 from the over 50 spectators packed into the coffee shop.

Every one of those dollars will go directly toward helping a women pay for an abortion she needs but cannot afford. Thank you for your support and for coming out to learn more and join the discussion on the politics of abortion and women’s access to safe and affordable health care.EXTRA SPECIAL THANKS to authors Kathryn Joyce, Jennifer Baumgardner and Michelle Goldberg for reading from their important works and selecting NYAAF as the cause to benefit from the event.If you missed the event, be sure to check out the books:Abortion and Life
http://www.akashicbooks.com/abor…

The Means of Reproduction: Sex, Power and the Future of the World
http://www.meansofreproduction.com/

Please help us spread the word about the New York Abortion Access Fund ( NYAAF) by sharing this link with friends on Facebook and in real life: www.causes.com/nyaaf

*in honor of Roe vs. Wade anniversary*
a portion of the proceeds donated to
New York Abortion Access Fund

Location: The People Lounge
When: Wednesday, Jan 21, 2009
Time: 7:00 PM
Where: In the heart of the Feminist District – People Lounge, 163 Allen Street, NYC
(Between Stanton and Rivington, F or V Train to 2nd Avenue)
HopStop Directions

“Fresh, moving, important…Muriel Rukeyser wrote, ‘If one woman told the truth about her life, the world would split open.’ [This film] gives us 10 truth-telling women, and splits the world open in as many ways.”
Katha Pollitt, The Nation

Underneath the din of politicians posturing about “life” and “choice” and beyond the shouted slogans about murder and rights, there are real stories of real women who have had abortions. Each year in the US, 1.3 million abortions occur, but the topic is still so stigmatized that it’s never discussed in polite company.

More info and to purchase a DVD:
http://www.wmm.com/filmCatalog/p…

About Jennifer:
After a five-year stint as an editor at Ms., Jennifer Baumgardner began writing for a diverse array of publications, doing investigative pieces for Harper’s, Mother Jones, and The Nation. Jennifer is co-author of Manifesta: Young Women, Feminism, and the Future; Grassroots: A Field Guide for Feminist Activism; and author of Look Both Ways: Bisexual Politics, as well as Abortion & Life.

Jennifer is a popular pundit and interview guest for venues from Oprah to Talk of the Nation. For two years, she was a host on She Span, a weekly political roundtable on the Oxygen Network for women. In 2003, the Commonwealth Club of California hailed her as one of six “Visionaries for the 21st Century”in their centennial year.

About Gillian:
Gillian Aldrich is a documentary producer and journalist who has worked on social justice issues in television, radio, and print. She has worked with Michael Moore on several projects, including most recently as a field producer for the academy award-winning documentary Bowling for Columbine; on his television series, The Awful Truth; and on his best-selling book, Downsize This; as well as contributing to his documentary, The Big One. In television, she line-produced Trio’s The Syringa Tree, a moving one-woman show about growing up in South Africa under apartheid. With Skylight Pictures, she co-produced Battle for Broad, a documentary about the Kensington Welfare Rights Union, a renowned group of homeless activists in Philadelphia who have made homelessness an international human rights issue.

About New York Abortion Access Fund:
NYAAF is a voluteer-run, non-profit organization that provides financial assistance to low-income women who cannot afford to pay for an abortion.
https://www.nyaaf.org/

About Women & Hollywood: News and commentary about Hollywood from a feminist perspective
http://www.womenandhollywood.blo…

Need help paying for an abortion? If you live in or are traveling to New York State, you may be eligible for our funds. Call our hotline: 212-252-4757 or email: info@nyaaf.org.